The Leader in Email Marketing Solution

CASL is one of the most aggressive anti-spam laws of any country that affects every marketer that communicates with Canadians. Our comprehensive guide will help you understand and prepare for CASL. 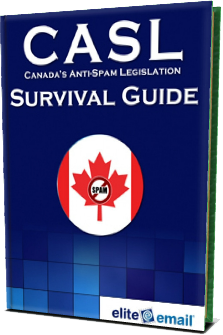 A Look at Consent

Canada’s Anti-Spam Legislation (CASL) – one of the most aggressive anti-spam laws in the world - will take effect in July 2014.

It has been a long journey for this piece of legislation that began its story in May 2004 with the Federal Task Force on Spam. Over the years, the Government of Canada has received input from hundreds of stakeholders with an interest in responsible electronic messaging, in an effort to create what it hopes is a comprehensive law.

The final regulations for CASL were released Dec. 4, 2013, which provided strict guidelines on what is, and is not, acceptable. In addition, it included important exceptions for charities, third-party referrals, and political parties, along with other key modifications.

Unrestricted implied consent will become a thing of the past. So if you're emailing or texting people in Canada, you'd better make sure you have their express permission to do so (or valid implied consent), because the consequences could be very expensive.

Compliance planning should go into high gear now and many organizations are unsure of how to prepare. We set up this survival guide to provide you with the essential information to navigate the path ahead.

This free guide outlines in layman’s terms: the regulations, timing, requirements, penalties and exemptions surrounding CASL. Consent is at the heart of the new law. The guide helps organizations identify whether or not they have proper consent, and if not, how to secure it prior to the imminent deadline, via a step-by-step action plan.

Your CASL Survival Guide Starts Here! Scroll down to read on…

What is CASL Trying to Achieve?

The official stated goal of Canada's Anti-Spam Legislation (CASL) is "An Act to
promote the efficiency and adaptability of the Canadian economy by regulating
certain activities that discourage reliance on electronic means of carrying out
commercial activities."

When you translate that to the real world, it essentially means that the
government is trying to stop the sending of spam to Canadians by imposing a new
set of strict rules that govern all commercial electronic messages (CEMs).

While the objective of protecting Canadians from spam (i.e. identity theft, phishing, spreading spyware, etc.) is a noble one that most people can support, the new regulations have a broader view of electronic communication, and therefore broader implications.  So even if your organization has been following email best practices for years, the new rule book still changes the game.

For the remainder of this guide we will simply use the term "email" or "SMS/text"
to mean CEM, unless indicated otherwise.

The legal evolution of CASL has played out as follows:

While most aspects of the law come into effect in July 2014, some components will be phased in.

The deadline for unsolicited installation of computer programs and software is January 15, 2015. Most other countries in the world don’t address this.

The right of action, which would allow consumers and businesses to take civil action against anyone who violates CASL, will be deferred for three years. This gives breathing room to businesses and helps the Canadian courts avoid a potential glut of litigation for an initial period while the new law is put into practice.

Section 66 of CASL creates a special transitional period for scenarios where there is implied consent based on an existing business or non-business relationship. According to the CRTC’s FAQ:

Section 66 deems implied consent for a period of 36 months (unless the recipient withdraws consent earlier) where there is an existing business or non-business relationship and the relationship includes the communication of CEMs. During the transitional period, the definition of existing business or non-business relationship is not subject to the limitation periods (6 months and 2 years) that would otherwise be applicable under CASL, for implied consent to exist.

The issue of implied and express consent is discussed later in this guide. The reason this transitional period is noteworthy is because typically there is a two year window after a customer makes a purchase (or six months after they submit an inquiry) where you have ‘implied’ consent to communicate with them.

However, with this transitional period, anyone you have implied consent from prior to CASL taking effect (July 1, 2014), will actually extend to 36 months (instead of the six post inquiry or 24 months post purchase). As long as you’ve already been communicating with them.

That being said, the definitions of “business” and “non-business relationship” can become murky, so the best and safest course of action is to get express consent even during this transitional window.

You can read the full law here:

The Regulatory Impact Analysis Statement from Industry Canada helps to qualify some of the components of the law and can be seen here:

The main Government of Canada website related to CASL can be accessed here:

Stay up to date on the world of Elite Email and email marketing by following us on various
social networks.

Become a true email marketing guru. Sharper your skills and learn new tactics in the most comprehensive resource
for email marketers.